Yes, we know - the title says it all! First, lets turn the clock back two years to 2019, when the foldable hype was at a fever pitch. Samsung kicked things off with an early look at its Galaxy Fold, followed a few days later by Huawei's Mate X. Motorola capped off the year with the Razr. Things were supposed to ramp up in 2020, with more foldables coming, and this forecast turned out to be true. But the early activity at this year's weirdest CES suggests we may be notice far more breakthroughs and mind-blowing concepts in the smartphone industry. 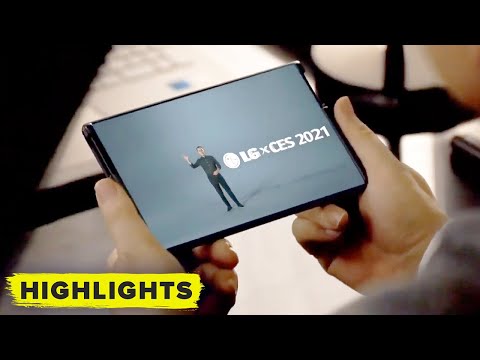 For years LG was known for its quite boring and overall conservative phone. At last year's edition of CES LG presented the LG Wing - a smartphone unlike any other, with a wild rotating design that makes it stand out when compared to even the weirdest phones up to date. It was also the first phone in LG's new Explorer Project brand, aimed at experimenting with new ways to think about how we design and use our smartphones. No surprise that this phone even won CES's 2020 Innovation Award.

Now the company once again showed a renewed interest in playing with the different concepts, breaking the mold of what a smartphone can be and can do! As a result, ladies and gentlemen, you may now meet the first smartphone with an expandable screen that rolls out, hinting at a comeback for mobile devices that could shake up the conventional metal and glass slate.

The teaser for the so-called LG Rollable was included at the very end of LG's CES 2021 presentation. The video footage only lasted a few seconds, but it showed the phone, being held in landscape mode as the display expanded and contracted like magic, though, in something of a flex, it was never actually acknowledged on stage. Fortunately, according to CNET LG's tease of its Rollable smartphone at its CES 2021 press conference wasn't just for show. The Korean company will release the phone later this year, said the media referring to people familiar with LG's plans.

It's yet unclear how the pullout display would work, but perhaps it would be similar to LG's roll-up OLED TV, which implements a flexible display that rolls up at the bottom of its stand when not in use. Or perhaps it's something much simpler and the phone includes two displays, one of which just encases the other on the outside.

Whatever the solution is, the new design is nonetheless compelling. It opens up many possibilities about the comfort and portability of big-screen phones that are great to view content on, but cumbersome and bulky to carry around.

LG, however, isn't the only one keen to get rolling, as Chinese electronics company TCL followed on Monday with two rolling designs. One was a 6.7-inch phone that "with a tap of a finger" could extend out to 7.8-inches. The second looked far more futuristic:  A 17-inch Printed Flexible OLED Scrolling Display. The accompanying concept video showed the screen unfurling like a scroll, though it looks more like a proof-of-concept than an actual product. The tech can be "widely applied on flexible TVs, curved and foldable displays as well as transparent commercial display screens," said TCL innovation head Tiago Abreu.

TCL said it would also be releasing a phone with a "flexible" display in 2021, though it's unclear if that's a folding display or the rolling one shown at CES.

These foldable and rollable phones aren't just gimmicks meant to generate some buzz. These new, experimental designs help move the industry forward when it comes to how mobile devices look and work in the years to come. Just like the iPhone caused handsets to evolve from flip and candy bar designs to sleek metal-and-glass slates, foldable, or in that case rollables, may spark a change in how we interact with our phones down the line.